THE DE- AND REMATERIALIZATION OF INFORMATION

In the contemporary culture of libraries and in art about it one finds a consistent tension between the dematerialization of information and an equal and opposite desire to rematerialize what it represents.

On the one hand, we know that order is a suspect social construction. On the other, we are still drawn to the Enlightenment idea of a tangible, knowable universe. The works in Library Science exemplify how well the physicality of traditional libraries serves as a medium through which artists informed by conceptualism and postmodern theory address this paradox.

Librarians are said to be one of the few professionals named for a building. Yet increasingly, we have left the building for the cloud, becoming more integrated into today’s larger information culture. Buckminster Fuller famously asked, “Madam, how much does your building weigh?” Now the question isn’t the weight of the building but the unbearable lightness of its digital incarnation.

As another comrade in today’s information collective, librarians are less visible, more often embedded in metadata than perched at a desk. At the same time, media is less mediated, and we are better able to discover what data thinks it’s doing, not what can only be inferred from parsing author, title, date, and subject. Today one is more likely to consume powerful "special sauce" algorithms that digest born-digitalia, enabling researchers to engage much more directly with ideas. One can argue that other kinds of “authority control,” as librarians term it, make transparence as illusory as ever, but that’s another essay. 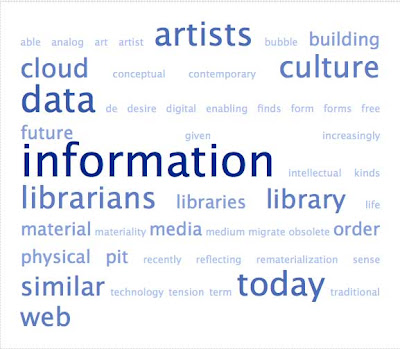 Tag cloud of this essay, generated in Tagcrowd by Daniel Steinbock

This ability to go deeper into data presents new ways to organize and visualize—and therefore make sense of—information. A common example of this is now-ubiquitous tag cloud, which maps relative density in a given data set, and conceptual relationships between tags (try it!) are increasingly mapped as well. In a similar way, image recognition enables us to literally see new kinds of information patterns, and data mining reveals previously invisible information landscapes. Thinking ahead, some theorize a semantic Web that would enable infinitely deep interconnections between now-disparate data points.

At the same time, within cloud-based, keyworded life, one finds a new materiality expressed in desire for tactility and empiricism, for integration of physical and intellectual order. This can be seen in the emergence of steampunk, dorkbot, Maker Faire, and general DIY. In contemporary print culture, this is marked by new directions in artist publishing, including a new wave of artists’ books and with that, vigorous revival of letterpress and other analog printing methods. As Rachael Morrison and Kate Adler observe, artists and designers are even reinventing libraries themselves.

An architectural manifestation of this tension is the Joe and Rika Mansueto Library at the University of Chicago (Helmut Jahn, 2011), a glassed-in data cloud topping a 50-foot pit of analog material. In this scheme, physical storage follows the logic of warehouses, with material arranged in logistical and not conceptual order. The bubble is for people and intellectual access, while the pit is for robots that move brain merch like forklifts at IKEA.

Crucially, the bubble and the pit are mirror spaces, informing each other. In a similar way, artists and librarians inform each other, enabling mutual reflection upon material in the broadest sense. 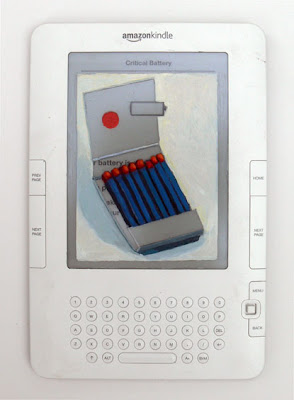 In the long term, how will this de/rematerialization play out in libraries and art? Just as artists comment upon today’s culture through symbols of the traditional library, this librarian imagines future artists reflecting on the information culture of their time using the information forms of our time. I try to get at this in my 30 Seconds of Web fame: what will the future make of now-new media? Will today’s information workers be able to successfully migrate the message into that future, to the next and the next medium?

And what about new media’s very real carbon footprint? Despite the promise of paperlessness and telecommuting, it’s not easy being green. From bad handling of obsolete circuit boards to the energy required to air-condition the cloud, digital life takes a toll on the environment. Information may want to be free, but today’s technology makes it want to be expensive.

One experiences these tensions through efforts such as the Wayback Machine, entered less for the 1996 recipes and more for the “feel” of the Web at a given moment. In a similar mode, visitors to the (physical) Library of Congress encounter a Web snapshot of 1997 in the form of hardware installation by artist Alan Rath. Taking it a step further, more recently the LC has started to archive Twitter and video games.

To conclude, a work that embodies the theme of immaterial materiality is Ellen Lupton’s Free Downgrade (2011). Here text has moved on from a recently obsolete Kindle, leaving it a mere “matchbook,” a burned-out technology smoldering in a slow fire similar to the oxidization of acidic paper.

Yet the data does migrate, morphing into new form and with it, new forms of meaning upon which librarians and artists will reflect.
Jennifer Tobias
November 13, 2011
Jennifer Tobias is the Reader Services Librarian at the Museum of Modern Art. She is also a doctoral candidate in the City University of New York Graduate Center's Art History Program, completing her dissertation The Museum of Modern Art's What is Modern? Series, 1938-1969.
Newer Post Older Post Home